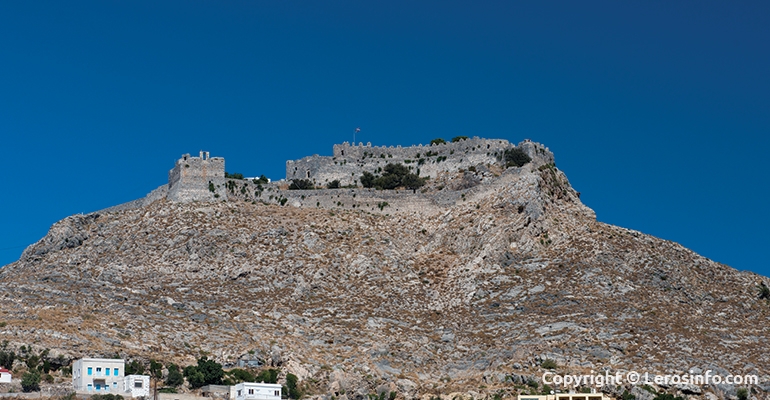 In the north-eastern part of Leros, at the top of Pitiki Hill and at approximately 200 meters above sea level, stands the island’s castle – Kastro Panteli. The Church of Panagia, namely the Church of the Virgin Mary, was built on the western side of the fortress, comprising a religious and intellectual cultural symbol for the residents of Leros. According to the legend, an icon of the Virgin Mary Panagia appeared on the island emerging from the sea. It is said that it was miraculously placed in the castle’s gunpowder storage area between two lit candles and remained there despite all efforts made by the Turkish Aga of that period to have it removed from that specific spot. The small icon of the Panagia Vrefokratousa, namely the Virgin Mary of the Infant Guardian, is a precious religious heirloom of worship for the local people of Leros. A holy icon of small dimensions is enclosed and kept within a woodcut frame and bears a gold and silver casing which was hand-crafted around 1732. The temple exhibits many valuable Episcopal icons of supreme quality. Many of them, as well as various other artifacts, are displayed and housed in the Ecclesiastical Vestry of Byzantine Art, which was recently built next to the temple of the church presently operates as a museum. For those who enjoy nice romantic walks, you ought to take a stroll through the neighborhoods of Platanos towards Agia Paraskevi. From there, you can follow the footpath with approximately 500 steps. At the end of this walk, you will meet up with the Kastro right in front of you. The breath-taking view from the Castle will take you back in time. For those in a hurry and less patient, there is a large, comfortable motorway leading to the same area.